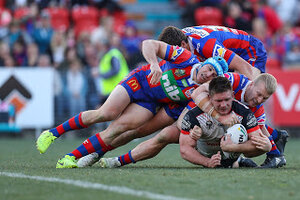 After an abysmal Round 21 against the Cronulla Sharks, the Warriors made the journey to Newcastle to face a Knights team buoyed by their upset Round 21 win over the St George Illawarra Dragons.

Both teams are only playing for pride, and this stage of the competition and the Knights proved they are not the easy beats they were in 2016 with a resounding 26-10 victory over and pathetic Warriors side.

The Warriors lacked discipline for the second week in a row giving away silly penalties, and they Knights were quick to strike, scoring two tries in the first 10 minutes.

After the first quarter wobbles the Warriors looked to be getting themselves into the match with a try to David Fusitua, after another lapse in discipline the Knights added two more points from an easy penalty attempt to go into the half time break leading 16-4.

The Warriors only started to show a sign of fight when Issac Luke was pulled and replaced with a hungry Nathaniel Roache, but that didn't stop the Knights running in their third try at the hour mark.

Roache got the Warriors second try of the night a few moments later to give the Warriors a sniff of a comeback.
But the Knights crushed all hopes of that with their fourth try of the evening to man of the match Brock Lamb with 8 minutes remaining to finally end the Warriors worse game of 2017 with a 26-10 defeat. Copyright Photo: www.warriors.kiwi​
My Warrior of the game goes to the Warriors ever suffering fans.

Years of let-downs were finally meant to be over in 2017; the Club talked a big game leading into this season with a new coach, Kieran Foran being the final piece of the puzzle and a “process” that would change the clubs fortune.

But yet again Warriors fans have been left to lament what could have been.

It’s a hard life as a Warriors fan, and one that I believe is never really acknowledged by the Club, so I am acknowledging you here, I hope 2018 bears fruit for this club, but as of right now it is not looking great. Copyright Photo: www.warriors.kiwi​
My Warrior who needs to improve is Issac Luke.

In a team that appeared not to want to be there and in turn offered very little in a fight, Issac by far was the crown jewel of disappointment.

With Shaun Johnson, Ryan Hoffman, Bodene Thompson and James Gavet all out injured, the Warriors need a player like Issac to set up as a leader, but he has instead been on a decline.
In the team named to face the Raiders in Round 23, Issac has at least been dropped which is rightly deserved.

What an embarrassment this game was.

The Knights haven't had back to back wins since 2015 and apart from a dropped ball at kick off the Knights never looked like losing this match.

The Warriors never got off the plane for this game; there was maybe four players out of the 17 that appeared to be putting in some effort.

Kieran Foran has gone into hiding since Shaun Johnson got injured, leaving Mason Lino to take up the crucial playmaker role.
Kieran has already left the Warriors mentally and really needs to look himself in the Mirror and put some effort in for the final four matches of his Warriors career, but then again does he really care what happens here?

The Warriors lack heart, desire and passion and show no signs of life anymore.

2017 has been a long season, and with four games left against the Raiders, Rabbitohs, Sea Eagles and the Wests Tigers.
I believe it is going to get a lot worse before it gets better.
The Tigers may be the only win the Warriors can get in the next month and with the way they are playing right now I don't think the will even defeat them.

This week the Warriors are back at Mount Smart to face the Canberra Raiders.
Stephen Kearney talked a tough game after the Knights defeat and vowed to wield the axe on the side but he barely even sharpened it with the only changes in his team being Ryan Hoffman making his return from injury and Issac Luke being relegated to the bench.

With fans baying for blood and Kearney's head, Stephen needed to make a stand, the fans and more importantly the players now know that Kearney is all talk.

Talks of the Warriors signing Adam Blair for next season have also divided the fans; I currently haven't made up my mind yet.

Reports say that Adam Blair doesn't want to leave the Broncos so that would lead me to suspect that they would be signing the Tigers Blair so I would most likely be avoiding that signing and looking at other options.

In an Ideal world the Warriors would sign James Graham, he is the player I would be throwing my money at, he still has a year left on his Bulldogs contract.
With rumours of the Bulldogs having to shed players to make cap room the Warriors may be able to swoop in and get him early.

The biggest issue the Warriors will have right now is trying to convince players of a good calibre to come here after six seasons of failure.

The Raiders have a strong side with a large forward pack and threats throughout the back line, and I predict them being too strong for the Warriors and I'm picking a Raiders to win by 10.

So that was a disastrous Round 22, and as per usual, I will leave you with some questions.

What is your score prediction for the Raiders match?

What do you think of the Adam Blair recruitment rumour?

What changes would you have made for the Raiders match?

Do you think the Warriors will get another win this season?
About author

Good article and I share your concerns regarding Adam Blair. Not just from his Tigers days but from the Origin periods for The Bronco's, his performance and influence drops at a time it should rise.

I fear we will become the basket case club of the NRL, the mismanagement throughout the organisation seems to have reached epidemic proportions. Take Cappy for example, seems a nice guy but didn't do as he was expected to as head coach, the result is him moving within the organisation.

Cappy has been at this club since 2013, and when head coach stated there had been a lack of professionalism around before he took the reigns, so two of those unprofessional years were on his watch as assistant? It boggles the mind as to how he is still here in any capacity.

Using Cappy as an example, if Luke doesn't perform off the bench on Sunday does he become our new centre?

The rhetoric of 'we need a hard nosed Aussie' is also I believe damaging to the club. It sends a very defeatist attitude toward all our young players coming through.

For me we are a club who has lost its identity and with it my love for the club is dying. Footy should be entertaining, we no longer are.