After round 17's embarrassing performance against the Penrith Panthers, the Warriors made the journey to Suncorp Stadium to face the Brisbane Broncos with both sides needing a win to keep in playoff contention.

In stark contrast to last weeks match, the Warriors came out victors with a comprehensive 26-6 win.

What a game this was, as I wrote last week I was not confident that the Warriors would be able to come away with the win but I was happy to be wrong this week.

The Warriors improved tenfold this week, there is still lot's of things to work on of course but the Warriors bounced back in style, and you could see that they relished the great weather an dry track they were able to play on which leads me to my positives from the game.

The first positive wasn't from the game itself, but the Warriors members function at Skycity, it was the first time I have gone to the Skycity game screening.

It was a great experience, watching the game on a large screen with a bunch of members was an excellent way to watch this game, and winning a prize at halftime definitely sweetened the function for me so thanks to the Warriors team for putting the event on.

But onto to the game.

The Warriors got back on track with what they do best, running those straight lines opening holes in the defensive line for their agile players to take advantage and consistently kept the Broncos defence on the back foot.

The forwards were prepared for the battle up front and delivered one of their better performances as a unit in quite a while.

Players that I have singled out the past few rounds stood up and redeemed themselves in my eyes with the two I want to point out being Peta Hiku and Jazz Tevaga.

I think a big part of Hiku's improved performance was the positional change that was made, moving Hiku out to the wing helped immensely.

He was less of a defensive liability on the wing but was still able to contribute to the match with some solid runs, if big Ken is 100% this week, however.

I would still be cutting Hiku as I liked what I saw in Beale at centre and Ken's hit-ups out of the Warriors own half are so crucial in getting the Warriors sets started strong.

Jazz is just the little engine that could, he just kept going and going and was the Warriors very owner little cleaner, mopping up any loose tackles and restricted a lot of the Broncos attempts at second phase football.

Speaking of the second phase, the Warriors finally brought the second phase back into their arsenal with the return of the offloads, yes they didn't always stick, but man it makes for an exciting watch when they can throw the football around.

Lastly, the improved defensive effort across the park was a sight for sore eyes, after last week were they appeared lost on defence, so it was great to see the Warriors return to the defensive efforts they showed at the start of the season.

Roger showed more desperate try-saving antics and the teams scrambling defence prevented so many of the Broncos last-ditch attempts to get back into the match, the Warriors were very close to being the first team to keep the Broncos scoreless at Suncorp, but the consolation try the Broncos scored wasn't that hard to swallow.

It still wasn't a perfect performance however which leads me to my negatives.

Not a lot of negatives this week but handling errors still need to be reduced, it was a significant improvement from last week though and im confident that they can bring them down some more.

They cost themselves a few more tries with some errors but it's easier to forgive those when they get a twenty point win, but in those tight encounters they will need to convert those opportunities into points.

The style that they play can lead to handling errors, so it does come with the territory, they just need to find that balance.

Penalties also need to come down but again like the errors they did improve from last week so im confident they can reduce it some more.

Restricting the opposition from as many chances with the ball in hand will be essential to how far the Warriors go this season, and I believe they do have the ability to cause some headaches in the playoffs.

Copyright Photo: nrl.com​
My Warrior of the day goes to Agnatius Paasi.

This was Paasi best performance to date by a landslide, with Bunty getting injured Paasi has stepped up and become the Warriors go to forward.

160metres, three Linebreaks, five tackle-breaks and a try show how devastating he was in this match.

He got more minutes this week, and it really helped the Warriors keep the pressure on, and I can't wait until Bunty returns, and the Warriors have both of them causing havoc up the middle. 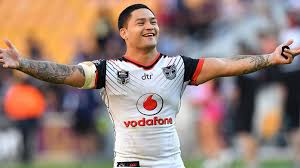 Copyright Photo: nine.com.au​
I have no Warrior to improve this week as I couldn't single anyone out that let the side down, so I will give a shout out to Issac Luke.

Issac had yet another excellent performance busting the Broncos wide open with devastating dummy half runs.

He has returned to form this season, and I think the best is yet to come from Issac this year.

Rumours are getting stronger that Issac will not be retained at the club next season but im still hopeful that there will be some way to keep him around next season as I still believe that he is the glue that holds this side together.

Round 19 sees the Warriors return to Mt Smart to host the Melbourne Storm in what is going to be a tough encounter.

After the humiliating Anzac day clash, the Warriors will be looking for some revenge, and the win would help them climb their way back up the ladder.

In the Warriors only Sunday afternoon match at home I'm going for an eight-point win for the Warriors, the Storm are performing well, but if the Warriors can play with the same intensity they did this week, they have a great chance to come away with the two points.

So that was my take on a wonderful Round 18 performance, and as usual, I will leave you with some questions.

Would you swap Hiku for Ken this week?

Do you want the Warriors to pull out all the stops to retain Issac Luke?

Who was your man of the Match?

What is your score prediction for Round 19?
Reactions: Centurion
About author