After the hard fought win in round 15, the Warriors made the long Journey to Perth to face the Manly Sea Eagles.

The Sea Eagles have been on a roll for the past month and facing them in Perth where the Warriors have never been victorious was always going to be a tough contest and the Sea Eagles played heartbreakers yet again with the Warriors going down 26-22.

In what has become a constant theme in 2017 the Warriors started this game quickly scoring 16 points.

The Warriors looked well on their way to breaking the Perth hoodoo but appeared to turn off mentally with the Sea Eagles finding holes in the Warriors defensive line scoring three tries in quick succession to level the game 16-16 at halftime.

Manly continued to dominate the scoreboard with another two tries in the second half before Charnze Nicoll-Klokstad scored after the Warriors took advantage of Akulia Uate fumble on a kick return.

The Warriors had a few more attempts to snatch a victory but were unsuccessful including an impressive run from Shaun Johnson that ultimately went nowhere as the Sea Eagles threw everything they had to stop the elusive playmaker.

So regardless of the promising start the Warriors went down yet again in Perth and are still sitting just outside of the top eight with time running out to make the cut.

Shaun’s performance was impressive, his kicking options were on point and he threw everything he had at the Sea Eagles.

When his confidence is up he is a dangerous player, his ability to break the line is unrivalled in this team.

His defensive game has also improved dramatically this season and it showed in this match with Shaun only missing 1 tackle.

If the Warriors are to have any chance of making the top eight they need this confident Shaun to show up week in and week out. 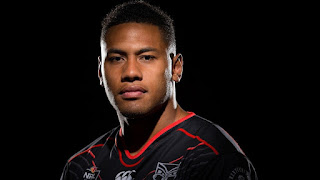 Copyright Photo: www.warriors.kiwi​
My Player who needs to improve is David Fusitua.

David has been a let down the past few rounds, once a shining light in the Warriors backline David has recently been overshadowed by Ken Maumalo and CNK.

A key moment in this match for me was during Shaun's large run towards the end of the match, Shaun signalled for David to cut inside but he just watched him, a faster reaction could have been the difference between winning and losing this match.

Missing in defence and losing a step on attack I am unsure what is going on with David but with the impending return of Solomona Kata he may find himself out of the side and he needs to return to the David fans have come to expect after the bye round.

The Warriors have improved, there is no denying that but as of right now they do not appear to have what it takes to be a top eight contender.

I always say that as critical as the Warriors fans are they will always appreciate this team if they appear to be trying and in this match they never appeared to give up, yes they will be rueing the missed opportunities but it is fair to say that the Warriors side of a few months ago would have lost in Perth by 20 or more points.

Injuries are a concern with Nathaniel Roache hurting his hamstring during an impressive run in this match and Albert Vete breaking his arm and they now join Issac Luke and Ryan Hoffman in the casualty wing with Kieran Foran not being 100% either.

The bye round this week is a blessing in disguise for the Warriors as they attempt to get these players healthy.

With 8 matches left to play the Warriors only encounter three teams that are currently in the top eight and if they are any chance of reaching the playoffs, they cannot throw away any more matches like they did this week.

They need to continue to start matches strong but they also need to keep their foot on the throat and not let their opponents back into the game.

After the bye round the Warriors are back at Mount Smart and face the Penrith Panthers.

Penrith have been on a decline in recent times and the Warriors are going to have to take advantage and I’m picking the Warriors to win this match by 12 points.

So that was a heartbreaking round 16 and as per usual, I will leave you with some questions.

With Vete’s injury, who would you bring onto the bench to replace him?

Is Kieran’s hamstring a concern and would you rest him from the next match?

Would you drop David Fusitua and replace him with Solomona Kata on his return?

What is your score prediction for the upcoming match against the Panthers?
Reactions: Centurion
About author