NZ Warriors Round 11 Review: Embarrassment continues in the Tron

After Round 10's second half implosion, the Warriors travelled south of the Bombay's to face the St George Illawarra Dragons in Hamilton.

A much-improved performance was required if the Warriors were going to come away with the sorely needed win.

The Warriors woes continued however with the Dragons putting on a dominating display and soundly defeated the Warriors 30-14.

The Warriors were quick out of the gates for the third match in a row with a try to Ben Matulino in his 200th game for the Warriors at the 13-minute mark.

The Dragons struck back with vengeance with three tries in 15 minutes to Kalifa FaiFai Loa, Joel Thompson and Timoteo Lafai.

With the first half coming to a close the Warriors managed to cross the line with Charnze Nicoll-Klokstad after the Dragons failed to defuse a Warriors kick, putting the Warriors behind 18-10 at the break.

This would be the last time the Warriors were close to competing in this match as the Dragons continued to break the line at will.

Three more tries in the first 20 minutes of the second half to Nene Macdonald, Kalifa FaiFai Loa and Tanne Milne put the game out of contention for the Warriors with the only Warriors highlight being another try to Charnze Nicoll-Klokstad in the dying moments of the match to end the game with the Warriors still searching for answers after a sound 30-14 defeat. 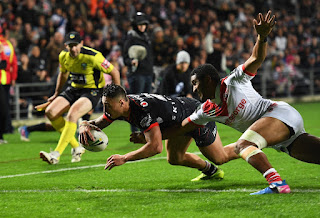 Copyright Photo: Andrew Cornaga / www.photsport.nz​
My Warrior of the game for the second week in a row goes to Charnze Nicoll-Klokstad.

The past two performances have been horrible and Charnze has been the only highlight.

With his pace and a nose for the try line, he has been a welcome addition to the Warriors back line.

His ability to turn the little chances he was given into scoring opportunities is a definite bonus to this side and if the team can turn their performances around the sky is the limit for this youngster. 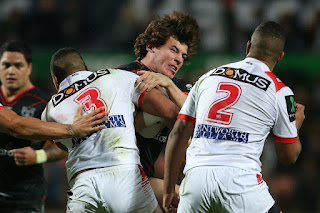 Copyright Photo: Bruce Lim / www.photosport.nz​
My Warrior who needs to improve, well that could go to so many players after this performance but I have selected Charlie Gubb.

With the Dragons having such a large forward pack all the Warriors forwards needed to front and Charlie just didn't show up in this match, he played for 26 minutes and only ran the ball 4 times for 41 metres and only made 17 tackles, comparing his stats with Sam Lisone who only played for an extra 5 minutes but ran 10 times for 100 metres and made 20 tackles, he was also the only prop to not pass 100 metres in this game.

With Ben Matulino back in the side and James Gavet being the Warriors best prop to date this season there, not to mention Albert Vete pushing to be brought back to first grade there is no room for Charlie if he doesn't improve his work rate.

I don't even know where to begin with this match.

No matter how you try to paint it the Warriors were hopeless, 57 missed tackles, 20 offloads to 2 and 9 line breaks to 1.

This team is in trouble, Stephen Kearney has tried to change the Warriors into a defensive orientated side with less focus on the trademark "Razzle Dazzle" and this is failing.

How do you fix it?

Is a player clean out required? I'm not sure the Warriors fans can handle a rebuilding season after so many years of disappointment.

I think some of the more experienced players may need a wake up call in the reserve grade, a few hungry youngsters fighting for chances may be just what this side needs to try and get themselves back in the winning circle, and lets be honest the youngsters couldn't play any worse than what this side is currently offering.

Confidence is down but is up to the Warriors to get themselves back on track, the fans can't do it for them but maybe some young enthusiastic players can help jump-start the season.

Kearney continues to preach his process but it is clearly not working, watching him at the press conference he looks out of his depth but the Warriors cannot flick another coach so he needs to put on his big boy pants and find a way to turn this side around.

The Warriors now have four wins out of eleven matches and sit at 13th on the ladder.

If the Warriors are going to turn their season around they need to do it this week when they face the Brisbane Broncos at Mount Smart in Round 12.

The Warriors are about to hit their favourite time of year with the Origin period starting and will no doubt be playing a Broncos side that will be severely depleted with players away in origin camp so they really have no excuses to not walk away with a win.

If the Broncos are depleted I am picking the Warriors to win by 10 but if the Broncos have a fair share of their starters playing I will have to say the Broncos will win by 14.

So that was Round 11, another embarrassing performance that leaves more questions than answers, and as per usual, I will leave you with some of those questions.

How can the Warriors improve their attitude?

Do you think the Warriors can turn their season around?

Which players would you bring in from reserve grade to try and add a spark to this side?

What do you think the score will be against Brisbane?
Reactions: tajhay
About author