NZ Warriors Mid Season Wrap Up: The good, the bad and the ugly 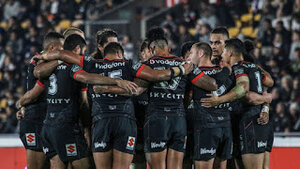 With the Warriors enjoying a bye in Round 13 I have no review to write, so I decided it was the best time to write my midseason review.

As my title suggests, the Warriors have had a bit of a mixed bag in the first twelve rounds of the season.

There were indeed many good moments, some bad and few a few ugly and at the midpoint of the season you could say they sit on a knife edge of where their season will end.

They have a better away record so far with only one loss in Australia with the other three defeats all happening at Mount Smart.

Coming into this season, I would never have predicted they Warriors to be sitting with a 6-6 record; I actually had them at a 6-6 record (I incorrectly predicted losses to come against the Rabbitohs in Round 1 and the Dragons in Round 7)

Keeping in the theme of my title I am going to break my wrapup into good, bad and ugly so to get it started let's go with the good. First up the Warriors come out of the gates quick and surprised many with their 5-0 start, their improved fitness clearly showed and they played a high tempo form of football that many teams could not keep up with.

The offloads returned in 2018 with the Warriors currently sitting at the top of the stat board with 171.

To make themselves a legitimate threat in the NRL, they need to start having players running the channels just off the shoulders to make the most of these offloads and open the game up with their second phase football.

The right attacking edge of Shaun Johnson, Tohu Harris, Peta Hiku and David Fusitua has been one of the most lethal edges in the NRL this season.

David who is continuing his world cup form is on fire this year sitting tied at the top of the try scorer list with 12 tries, and I don't see him showing any signs of slowing down in the next 12 rounds.

The 2018 signings, for the most part, have been all winners with the standouts for me being Blake Green, Agnatius Paasi, and Tohu Harris.

With a plethora of young talent in this Warriors side, the experienced heads of Blake, Tohu Harris and Adam Blair have made a difference in how this side performs.

With these guys on hand for the next few seasons, I'm sure the young players are going to learn so much and be a hell of a team for years to come.

The trio of Blake Green, Issac Luke, and Roger Tuivasa-Sheck have been the key to a lot of the success the side has had in 2018.

Roger and Issac have both been enjoying their best seasons in Warriors colours with Roger being my player of the year to date with Issac not far behind him.

Blake Green has added the right balance needed for Shaun Johnson to get their halves pairing firing at a level we haven't seen since James Maloney left the club.

With Shaun returning from injury next week im hoping that he stays fit and we can see their partnership grow as the Warriors aim for a top 4 spot come playoffs.

My game of the year has to be the Round 7 win over the undefeated Dragons; they were a formidable side with a giant forward pack and the Warriors forwards matched them at every level, which just opened up so many opportunities for the back line to strike.

If the Warriors forwards could return to that kind of intensity, it would make the Warriors one of the harder teams to face.

Lastly, I wanted to highlight the turnaround by Ken Maumalo.

Big Ken was always up there in the meters gained count last year but was plagued by handling errors and defensive lapses.

This season, however, he has reduced his error rate and increased his meter eating capabilities, admittingly his try-scoring rate is still low, but with a try-scoring machine on the other wing, it should come as no surprise that the Warriors try to funnel their last play options towards the right.

2018 has lots of reasons for fans to smile so far but there are issues also which leads me to the bad. With the Warriors, surprising teams early on it was only a matter of time before teams started to find ways to try and disrupt this team. Unfortunately, the Brisbane Broncos were the first to crack the code and put the Warriors pack under pressure and this season every time the Warriors pack has been bullied and dominated they have not looked to have any chance of getting the win.

The Warriors have a smaller more mobile pack, but they still need to bring some physicality to the table to set that platform for their explosive backline.

The gap between Agnatius Paasi and Bunty Afoa and the rest of the front rowers is too big right now and James Gavet, Sam Lisone and co need to improve sooner rather than later.

The missed tackles have been a huge concern this season, the Warriors have missed 416 tackles so far this season making them the third worse in that category.

You cant expect to win premierships if you miss that many tackles.

I'm not sure if the Warriors need to change their technique or if its simply just an attitude or skill issue but mark my words if this area of their game doesn't pick up in the second half of the season we could witness a slide to the bottom eight.

Lastly, for the bad, I want to mention the penalties.

The Warriors have been guilty of giving away lazy penalties this season, with many of them occurring in their red zone, some of the games they have won could have just as easily been losses if the opposition elected to take penalty kicks each time the Warriors were penalised near the goal line.

Some have claimed that this has been a tactical ploy by the Warriors but come playoff time you want to starve the other time of possession and giving away penalties is not the way to do it.

The good thing is that all the above can be addressed and fixed, I just hope that that actually happens.

All that's left now is the ugly. The injuries have been ugly this year, every team gets hit with Injuries, but I think the key to the Warriors change of fortune this season coincided with the injuries to Shaun Johnson and Leivaha Pulu.

Shaun is due back this week, but Pulu still has some time to go, I just hope that in Shaun's case he stay 100% for the rest of the season.

The only other things I could think of to class as ugly was, in my opinion, the Warriors two worst performances of 2018.

In 2018 when the Warriors lose they really get a beating, and these two matches were by far the biggest and the ones most fans will want to forget.

They were found out in both these matches and failed to offer any fight back, all you can hope for as Warriors fans is that the Warriors have learned from these two losses and don't deliver more performances like that in the second half of the season.

Overall I'm happy with a top 4 spot at the midway point of the season; I think I am going to stick with my preseason prediction of a 7th place finish at the end of the regular season.

With the Warriors favourite time of year is now upon us with the State of Origin period starting now is as good a time as any for the Warriors to turn the P/D around, im just hoping the post Origin slide that they have had the past few years stays away this year.

The Warriors are back in Round 14 and are travelling down to Christchurch to face the Manly Sea Eagles.

It should be a good match for a South Island crowd starved of live NRL games to watch, so im hoping there is a large crowd.

Manly haven't had the best year to date and im predicting the Warriors to come away with a 14 point win on Friday night.

So that was my Mid Season review, and as usual, I will leave you with some questions.

Who is your player of the year to date?

Who is your player that needs to improve the most?

Where do you see the Warriors finishing on the ladder?

What is your best or worst game so far this season?

What is your score prediction for Round 14 in Christchurch?
About author