Nz Warriors 2017 Round 1 Review : Round 1 Hoodoo broken in Ugly Win 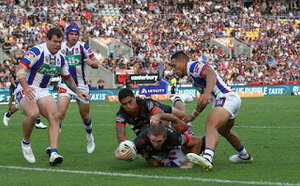 The Vodafone Warriors kicked off the 2017 NRL Season at Mount Smart Stadium for the first time since 2009 with a win over the Newcastle Knights.
The team had a lot of expectations leading into this game against last year's wooden spooners and although it was ugly, they got the victory and the two points.

The Warriors started the game slow and the errors that plagued this side last season returned with the Warriors dropping the ball on their first tackle on their first set for the season.
Passes were not sticking and it seemed that the Warriors had bought into the general consensus that the Knights were going to be easy beats and early on in this game they were punished.
The Knights were the first to score with Peter Matautia leaping over Tui Lolohea to catch a pinpoint kick on the try line.
The pressure continued as the Warriors held the Knights out and finally started to click with the first of three David Fuistu'a tries.
A try to Solomone Kata helped the Warriors ease to a 20-8 lead at halftime.
The wheels started to wobble in the second half when the Warriors lost Simon Mannering and Issac Luke to injuries.
Losing these two players severely weakened the Warriors middle and the Knights started to take advantage of this and mounted a comeback.
A feeling of "Oh no here we go again" started to fill Mount Smart Stadium as it looked like the Warriors were about to yet again snatch defeat from the jaws of victory as they let the Knights score soft tries and regain the lead 22-20 with 13 minutes to go.
The fans in the Stadium sat with baited breath waiting for any someone to step up and save the day and that man came in the form of Ryan Hoffman who forced his way over the try-line.
With that score, the Warriors were ahead again and held the Knights out for the final 7 minutes to finally break their Round 1 Hoodoo.

My Warrior of the game goes to David Fusitua, he had another strong game, scoring three tries is a great feat but I'm more impressed with the 14 from 14 tackles.
David's big frame, athletic ability and magnetic attraction to the try line (8 tries in 8 games at centre a telling stat) make him one of the key figures in this Warriors backline.
I believe that if David and Tui can be given time to work together in a centre wing combo instead of being moved around every week they will start to click and cause real headaches for any team.

My Player who needs to improve goes to Ken Maumalo.
Ken's first touch resulted in a knock on and Ken struggled to get back into the game.
He did have a few good run's later on in the game but his confidence had taken a serious knock, and when his confidence is done his performance drops.
He has potential to be a damaging winger in the mold of Manu Vatuvei, he just needs to relax and get the basics right and success will follow.

This game was a mixed bag, it was great being back at a live Warriors game but the performance was not what I expected.
I don't believe the Knights are as bad as they were last season but this was a game where the Warriors should have made a statement and piled on the points.
But they Warriors did show heart, last season if the Warriors lost a lead late in a game their heads would drop and they would give up on themselves.
But in this game when they lost the lead they just kept pushing the Knights are trying to make something happen, that is all I really ask for from the Warriors, no game will be perfect but if they keep pushing themselves to the very end, good things will come.
But then again maybe this is just what the Warriors needed, a tougher game to let it sink into the team and fans alike that there is still a lot of work to do no win is ever guaranteed.

There were negatives in this performance, ball handling was still a big issue and with the loss of Mannering the defence took a serious hit and the Warriors were exposed.
Having a suitable interchange bench is a must as Bodene Thompson being used as a Hooker did not help the side and they lost the quick ball that was proving so successful in the first half.
Issac can play 80 minutes but you need a hooker on the bench just in case, with Jazz and Nathaniel still under an injury cloud they need to bring Erin Clark onto the bench.

There were also positives in this match, however.
Shaun started to show more intent and attacked the line more often which broke the Knights defensive line up and made it easier for the likes of Fusitu'a and Kata to score.
The props made more impact for the side and eased the pressure on the impressive backline.
Ryan Hoffman had one of his best games for the Warriors, he really stepped up in the absence of Simon, maybe the pressure of being captain being taken off his shoulders has helped him focus on his performance or perhaps the fact that he is now fighting for an NRL contract has improved his performance.
Roger Tuivasa-Sheck played well at the back and it is good to see the Warriors with a fullback that is safe under the high ball.
Ata Hingano had another good showing and more than held his own out there, he is still very young and has a long way to go but he did not become a liability and will be looking at cementing a spot in the 17 long term.
Overall the negatives are not hard to fix and this team knows how to score points so I'm still confident that this will be a good season for the Warriors.


The Warriors have a 5 day turnaround until they face the Melbourne Storm and are sweating on the health of Simon Mannering, Issac Luke and Charlie Gubb.
It sounds like Simon and Charlie will be fine but Issac is still in doubt.
Playing the Melbourne Storm will be tough and if the Warriors play in a similar style to how they played the Knights they will be in for a rough night.
But the Storm had a tough battle in Round 1 and with the loss of Jesse Bromwich, this may be the best time to face the Storm.
If the Warriors can eliminate their unforced errors and tighten up their defence I believe they can take it to the Storm in what could be an exciting match up.
I'm picking the Warriors to take this match by 6.

So now that Round 1 is all over I will leave you with some questions.

What did you think of the Warriors Round 1 performance?
Are there any changes you would make to the Warriors game-day 17?
Who was your standout performer?
What's your score prediction against the Storm?

Let me know what you think and I will talk to you all next week.
About author