After sifting through more than 100 players with links to New Zealand scattered around the NRL and Super League, we have come to the end of our definitive list of the top 50 Kiwi players in the world right now. Among the top 10 are a number of players who are good enough to be playing State of Origin if they were eligible. These guys are top class and a great example of how far New Zealand league has come. 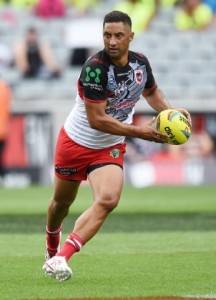 Benji Marshall enjoyed on of his best seasons in the NRL in 2015. Credit: photosport.nz

10. Benji Marshall – In a world where representative teams were picked solely on playing ability Marshall would have resurrected his Kiwis career last year. We aren’t in that world and he didn’t feature in Stephen Kearney’s plans, but the former New Zealand captain is nonetheless deserving of a place in the top 10 of this list. Only Johnathan Thurston assisted more tries than Marshall’s 22 last season, and despite lacking the razzle dazzle he once had a trademark on, 2015 was one of Marshall’s better years in the NRL.

9. Martin Taupau – Even if you avoid being buried initially by his fend, the 112kg frame of Martin Taupau will probably get you. The 26-year-old Auckland native is a player who can genuinely shift the momentum of a match with the way he runs the ball, averaging 109.6 metres per game last year. Joins the Sea Eagles on a four-year deal where he is sure to benefit off players like Daly Cherry-Evans.

8. Ben Matulino – Matulino has grafted his way onto the list of the world’s top 10 front-rowers, evolving his game drastically after debuting as a hard-hitting back-rower in 2008. One constant through that period has been his dangerous offload, and last year he finished second in the NRL with 53 of them. You wouldn’t pick a Warriors or Kiwi team without this guy in it these days. 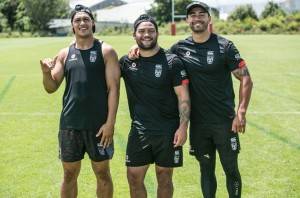 This Warriors trio all made their way into the top 10 of our list. credit: warriors.kiwi

7. Issac Luke – Season 2015 didn’t bring out his dynamic best in terms of dummy-half running, but Luke proved once again that he is among the best all-round hookers in the game right now. Solid decision making when it comes to pass or run situations and a tenacious competitive attitude are his major boasts. An 80-minute player with a hunger for defensive work, he averaged 30 tackles per match last year and was awarded co-captaincy of the Kiwis for the tour of the UK.

6. Tohu Harris – Many thought his omission from the 2013 World Cup squad to accommodate Sonny Bill Williams would be the major talking point of his career. No chance. The rugged boy from Hastings can now be counted among the best players at the Storm, and last year was shortlisted for the Kiwis Player of the Year Award. He averaged 32 tackles across 26 games – the 19th highest total tackle count in the NRL – played the full 80 minutes in all but six games and made just five errors all year at club level. Rest assured the next time a player has to be sacrificed for another in a Kiwis squad it won’t be Tohu Harris making way.

5. Kieran Foran – You know you are doing something right when your contract comes to an end and more than half the competition pursues your signature. The Ellerslie Eagles junior directs traffic well and heads to Parramatta as one of their biggest signings in recent times. Looks set to wear the no.7 this season and will take his next step as a player by captaining the Eels.

4. Jesse Bromwich – A machine in the middle of the park with an exceptional workrate. Bromwich finished second in the NRL last year for total runs (435), hit-ups (366) and total run metres (4118). Played every single club and international game through 2015 in what is a testament to his durability, while he was deservingly awarded the Kiwis Player of the Year Award in January.

3. Simon Mannering – Mr Reliable for club and country. His 1092 tackles were the third most in the NRL, but more impressive is the fact that he missed just 27 all year. Mannering spent most of the season playing injured but still delivered the same unfailing performance in the middle of the park every week. Of the 1925 minutes of rugby league the Warriors played last year the second-rower missed just 65 of them, while at international level he led the Kiwis to the top of the world rankings with victory over the Kangaroos in the mid-year Test. 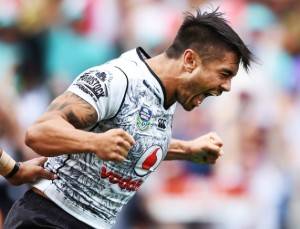 2. Shaun Johnson – Before he suffered a season-ending injury in Round 20 last year Johnson had scored more points, set up and made more line breaks, and created more tries than any other member of the Warriors. Those still persisting with questions about how effective he really is need only look at the how both the Warriors and Kiwis stuttered their way through games without him. An undisputed star of world rugby league on the field, and one of the game’s most marketable stars off it.

1. Roger Tuivasa-Sheck – A revelation in his first full season as an NRL fullback last year, ‘Roger Tuivasa-Sheck’ reached levels no other player in 108 years of Australian rugby league had managed previously, becoming the first man to run for 6000 metres in a single season. On route to that he ran for 200 or more in 23 of his 27 games, including three where he eclipsed 300 across the 80 minutes. His footwork before contact is top-class, he’s safe under the high ball and has underrated defensive ability close to the line. Inclusion as the Dally M and World XIII Fullback of the Year are the final pieces of proof that Roger Tuivasa-Sheck is the best fullback in the world right now.