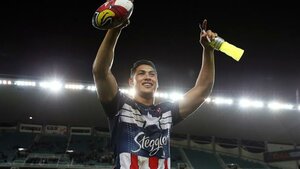 With more than half of the players and teams in the NRL officially in off-season mode it is time to hand out the playtheball.co.nz awards for the 2015 season.

Player of the Year: Johnathan Thurston (Cowboys)
No surprises here – Thurston has been hands-down the best player in the comp all season. He has achieved almost all there is to accomplish in the game barring carrying the Cowboys to a maiden title – and he’s still a chance of doing that this year.

Rookie of the Year: Jack Bird (Sharks)
In a season where numerous rookies made significant contributions it was hard to select just one winner. Jake Trbojevic was tremendous for Manly this season and looks to be a star for a long time to come. Reagan Campbell-Gillard has been the rock of the Panthers forward pack this season. Tuimoala Lolohea played almost every position in a struggling Warriors back-line and performed to a high standard. Storm fullback Cameron Munster has deputised for the injured Billy Slater superbly and has become more dangerous as the season has drawn on and Titans half Kane Elgey looks to be a star in the making. Bird however has looked every bit as good as advertised in making his rise with the Dragons. The Sharks were a different side with him in the number six jumper and he has continued that form in the playoffs. He could well have a future in the centres or back-row with James Maloney linking up with the Sharks next season but Bird has played so well it will be hard to move the youngster.

Coach of the Year: Wayne Bennett (Broncos)
I was tempted to go with Cowboys coach Paul Green, Dragons mentor Paul McGregor or Roosters maestro Trent Robinson but the old master has returned to Brisbane and whipped the Broncos into title contenders within 12 months. He put the heat on veteran rep forward Sam Thaiday early in the season and it brought the best out of the former skipper – earning him a three-year contract extension late in the season.

Buy of the Year: Blake Austin (Raiders)
Even though his form tapered off in the final weeks of the season Austin was superb for the Raiders. Pushed out of the Tigers late last year Austin took up the opportunity to go to Canberra and did not disappoint. So good was his play that he was the form player of the competition around the State of Origin period and must have tempted NSW coach Laurie Daley to select him. Austin provided a number of match-winning performances to keep the pre-season wooden spoon favourites in the hunt for the finals spot until late in the year.

The Kate Upton Award (Bust of the Year): Chris Sandow (Eels)
This award goes to the player that was the biggest disappointment of the 2015 season – injury aside. Any number of the Newcastle Knights could have been a contender here, as could Tigers hooker Robbie Farah but it was almost impossible to go past Sandow. The former Rookie of the Year failed to fire at the Eels, publicly dissed coach Brad Arthur’s coaching style and then fled to England where he feared little better. No team containing Sandow has played in the finals before and he never lived up to the big dollars attached to his Eels contract.

The One Direction Award (Best Break-Up of the Year): Robbie Farah/Wests Tigers
There was only ever one contender here. Robbie Farah has been the one constant at the Tigers through all of their many seasons of upheaval – think Benji’s departure, Tim Sheens’ departure, Beau Ryan, Mick Potter, and endless number of administration changes. But new coach Jason Taylor made the big call to tell the club’s franchise player that he was wanted next year. Farah is owed close to $1 million and has limited opportunity to go elsewhere without the Tigers eating the majority of what he’s owed. It will be the biggest story to follow in the off-season. Stay tuned.

The Miley Cyrus Lost the Plot Award: The Bulldogs
The Good Friday clash between the Bulldogs and the defending premiers turned almost farcical as the heated contest saw Bulldogs skipper James Graham penalised for diving at the feet of Rabbitohs play-maker Adam Reynolds, Reynolds go down with a serious knee injury, Graham placed on report, young prop David Klemmer sin-binned for abusing a referee and Bulldogs fans hurl bottles at the officials, including injuring one.

The Allan Donald-Lance Klusener yes, no wait Award: Daly Cherry-Evans
The Manly halfback announced early in the season that he would be moving to the Gold Coast Titans in 2016 and was seen as the saviour of a club reeling from the pre-season drugs scandal. Cherry-Evans was famously seen meeting with potential suitors before announcing his deal with the Titans. But within weeks reports began surfacing of a potential back-flip. Despite denying a back-flip numerous times Cherry-Evans announced a life-long deal with the Sea Eagles much to the disgust of the Titans and wider rugby league public.

The Des Hasler memorial post-match blow-up Award: Des Hasler (Bulldogs)
Having been gagged from talking about referees thanks to a new NRL directive, the Bulldogs skipper had the waiting media in stitches when he spoke about “those who cannot be mentioned” and called them Voldemorts. Only Hasler could shove it up the administrators by following their orders.

The Jim from American Pie Award (Premature arrival award): Dave Smith
Out of the blue NRL boss Dave Smith announced the NRL had signed a huge television rights deal with free-to-air broadcaster Channel 9 for 2018 and beyond. The rights for free-to-air coverage were for significantly more than the current deal but the pay television and digital rights were still to be negotiated. Less than a week after trumpeting the new deal the NRL watched Fox Sports (the main pay television broadcaster) announce a new rights deal with the AFL that would blow the NRL package out of the water. They also clearly pissed off Fox boss Rupert Murdoch and now run the risk of having the only real competitor in the market refusing to play ball. Watch this space.

The Lewis Rd Creamery Chocolate Milk Award (we love it but we can’t find it): Matt Moylan (Panthers)
Storm fullback Billy Slater was a contender and so was Panthers centre Jamal Idris but the later’s teammate Matt Moylan earns the nod this year. Primed for a big season after being selected in the Australian Four Nations squad last season, Moylan was expected to lead the Panthers to premiership contention and push for Origin selection but a season-ending injury curtailed the chances of that.

The Reese Witherspoon ‘don’t you know who I am?’ Award: A member of the NZ press
It was certainly a case of mistaken identity but not in the way most would assume. Former Kiwi and Radio Sport expert commentator Owen Wright has been at almost every Warriors home match through the club’s 20 years in the NRL competition, providing his thoughts on the game via radio better than any expert in the country. Wright, pre-game at one Warriors fixture went from the radio broadcast studio into the nearby media room kitchen to grab a piece of complimentary fruit and bottle of soft-drink to sip on during the game where he was confronted by a Kiwi league journo. The league journo, who is good for breaking a few juicy yarns, didn’t recognise Wright and asked what he thought was a cheeky member of the public why they were helping themselves to the media food allotment. Wright politely explained he was commentating the game and an embarrassed journo quietly went back to his laptop. The reason I mention this? That same reporter got me good with an April Fool’s story a few years back. He of all people should know that we, in the sports media, have long memories.

Enjoy the rest of the 2015 Finals series and roll on 2016.
About author
Play The Ball
This article has been written by Dale Budge. Dale is a well known rugby league commentator and journalist, having covered the sport for over 10 years.