LOOKING LIKE A FOOL WITH A PROP ON THE WING 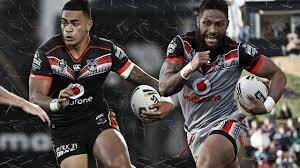 ​
Can we all agree that Ken Maumalo has no place as a first-grade winger? The Warriors obsession to find the next Manu Vatuvei has led them to pick a winger who is better suited to prop. Maumalo may have the size and debatably the top end speed of a young Vatuvei, but he does not have the agility, acceleration or attacking instincts that made Manu a star. He is good at gaining metres early in the set, but this needs to compliment a winger’s finishing skills not be a replacement for them. He could try and convert himself into a prop, although when defensive lines are set his running style is very upright and he is prone to be driven back. Round 1 should be Maumalo’s first and only taste of first-grade wing for 2017.

It seems likely that Manu Vatuvei will replace Maumalo for round 2, but if Vatuvei on the wing is the answer, I am not sure the Warriors are asking the right question. Sadly the 2017 version of Vatuvei has more in common with Maumalo then with the younger version of himself. At 31 years old, weighing 113Kgs and without the acceleration he once had, one feels Vatuvei will be increasingly exposed on defence. To replace Maumalo with Vatuvei is simply to trade prop for prop. In his day Vatuvei was a sensational winger, but we cannot afford to pick our team on nostalgia.

The obvious answer is that Blake Ayshford will need to start at centre with Dave Fusitua outside him. Some will argue that this is a waste of Fusitua’s talent, but you only need to look at his finishing on the wing, acrobatics in the air and Ayshford’s ability to set up his outsides, to know he can still have a major impact out wide.

This change needs to happen immediately because right now Kearney's “Looking like a fool wit
a prop on the wing”
Reactions: Inruin, Maddog, Dino Velvet and 1 other person
About author

Nailed it! Absolutely spot on. But why does both McFadden (last year) and Kearney not agree?

Warriors need finishers out wide, not battering rams.
Agreed,are the Warriors trying to re-invent the role of a Winger? Because it certainly looks like it with those ball carrys and lack of athletic ability.Maumalo appears to have all of Manu's weaknesses without his strengths,as for Manu in his current form hes not offering half of what Fusitua could on the wing.