It’s a Wednesday afternoon in February inside the gym at Mt Smart Stadium and Ali Lauitiiti is having one of those days where he can’t avoid knowing he’s a 36-year-old professional rugby league player.

His left hamstring is giving him trouble and has been for most of the pre-season since he arrived back in Auckland.

It’s a veteran niggle if ever there was one, caused by overworking the tendon across a 17-year career which has seen him represent three clubs in two hemispheres.

While it’s nothing serious or long-term, you can sense the frustration in Ali’s voice. When you know you probably only have a maximum of 28 games left in your career you really don’t want to be missing too many through injury.

The dodgy hammy has meant he is yet to do any significant part of the pre-season with his new teammates at his original club, which he hasn’t donned the jersey of since 2004.

It’s also a reminder that Alaimatagi Lauitiiti, the offload-out-of-nowhere-dynamic-fending-game-changing-Michael-Jordan-of-league, is going to add value in a different kind of way this time around for the Warriors.

“Obviously all the fans are probably expecting that Ali to still be here, but I have just got to do what the coach and staff want and try and get into the team first,” Lauitiiti says.

“We have heaps of good second-rowers running around so there is some good healthy competition going on and at the end of the day the coach will choose the best players.

“I still need to catch up on some fitness stuff, at the moment we are just taking things slowly and trying to get some mileage in the legs and get up to speed.

“I have had a few hiccups with hamstring injuries.

“Age? Yeah I reckon it is a sign of that, I did it doing speed work…my hamstrings are not holding that well.” 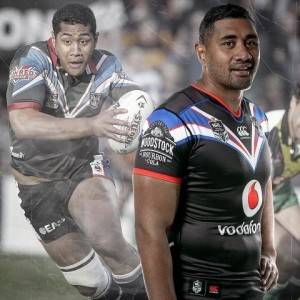 Ali Lauitiiti then and now in a Warriors jersey. Credit: warriors.kiwi

Big Ali’s return to Mt Smart Stadium marks the homecoming of a favourite son who most to this day believe should never have been allowed to leave.

Just two years prior to his sudden and inexplicable sacking from the Warriors in 2004 Lauitiiti had been recognised as the best second-rower in the NRL, helping lead the club to the 2002 NRL Grand Final.

It was abundantly clear how good he was, but that wasn’t enough to stop him from becoming a victim of an erratic and ultimately short-sighted decision by the club at the time.

While the early 2000’s under coach Daniel Anderson saw the Warriors record some of their best on-field results, it was also a time highlighted by some questionable management decisions (the great Stacey Jones was relegated to the bench the same year Lauitiiti left).

News of Ali’s departure shocked the club’s fanbase and kick-started an international battle for his signature, which was eventually won by Leeds.

Former Warriors staff members recall it was a situation even those on the inside couldn’t get their head around at the time.

For his part Lauitiiti insists there were never any sour grapes. But even if there were they would have well and truly decomposed by now; the current Warriors’ administration resembles nothing of the 2004 setup.

“For me I don’t look at it that way; that was just a misunderstanding,” Lauitiiti says.

“We went our own ways and it was pretty much mutual. That’s just the way it is and it is all part of business and all that.”

After finishing his testimonial season with Wakefield last year big Ali was set to head to France to gradually retire in the second division competition while enjoying the lifestyle, before a chance txt message opened an opportunity back home.

“It was just a random txt to Rubes (Ruben Wiki) and from there he told Tony Iro who called me up to see if it was for real.

“That’s how it happened and pretty much for me it was about taking the opportunity to come here and be part of the team.

“Not much has changed in terms of the boys just relaxing and having a good laugh away from footy.

“The intensity and the work ethic at training are still the same. The club is well run now, it all starts from the top, so everything is going well.

“I think it’s just the freshness of everything which I am enjoying so far. Everything seems new to me again.

“It is awesome being around guys like Ruben and Stacey (Jones) again, just to get a bit of their wisdom and also have them passing on their experience of the game to us.

“It has been a bit overwhelming at first to be back because myself, my wife and my kids are used to having our own space in the UK and doing our own thing.

“But here we have our family – which is a bonus and a good thing – seeing my olds and my wife’s parents, but it’s different to deal with.

“Also for the kids seeing their cousins and all that. All except the second youngest were born in the UK so it is very different here for them and they have had to get used to it.

“But slowly they are adapting to school life over here. They are enjoying the weather unlike me, I am struggling at the moment!” Off the field Lauitiiti credits the 12-year stay in the UK for making him a better father and husband, and in rugby league terms it’s hard to argue that it was an extremely valuable experience as well.

In his first season with Leeds Lauitiiti won the Super League title, starting in the second-row in a 16-8 victory over Yorkshire rivals Bradford, a team packed-full of Kiwis such as Shontayne Hape, Lesley Vainikolo, Joe Vagana and Robbie Paul.

In total he played eight seasons with Leeds after initially only signing for two and a half years.

“It was the group of players who were coming through at the time, we were eager and motivated to do some good things. I just slotted in with that,” he says.

“We had some great players and the brand of footy we played was good to watch.

“I was telling the boys, if I hadn’t been married I don’t think I would have even gone over to the UK. My wife was a big part of why I went there and why I stayed so long.

“Also when I had my first child that was a big thing to push me to stay there longer and go well.

“Myself and the family were happy there, they made some good friends and were settled so why change it?”

Three years at lowly Wakefield capped off his time in the Old Dart.

If Lauitiiti does make it back to the NRL with the Warriors this year and add to his 115 appearances – and despite his history it is a big if – it probably won’t happen until the middle or back end of the year.

Part of the reason for that is the Warriors possess a wealth of back-row talent, with a locked in starting three and some highly-rated youngsters coming through both the Holden Cup and NSW Cup systems.

It will take a few injuries for a gap to open up, and even then Ali isn’t guaranteed to be the filler coach Andrew McFadden calls on. It is also likely to take a couple of months in the lower grades for him to get back to the kind of fitness demanded of forwards in the NRL these days, particularly in a year where the interchange has been reduced from 10 to eight.

McFadden, who took the field against Lauitiiti towards the back end of his own playing career, believes the addition of the former New Zealand and Samoa international will be a huge positive for his squad, regardless of the level he plays at.

“It’s been difficult for Ali at the moment because he has been in the rehabilitation group, but when he is on the field he has got a really strong voice, he obviously understands the game really well,” McFadden says.

“He is going to be a great, great person to have around our young players.

“It’s going to take him a bit of time to find his feet I think, but certainly we have a long-term view on him in terms of this season and he is going to be a very valuable for our young halves in that second grade to start with.

“Some of these guys (in the Warriors squad) haven’t even heard of Ali they are so young.

“But it is great to have those sorts of people around you.”

The players too are already relishing the chance to learn off Lauitiiti, who has a squeaky clean off-field record to go with his impressive football resume.

Twenty-six-year old prop James Gavet, who has just signed with the Warriors in a bid to resurrect his career which to date has been dogged by battles with alcoholism, sees Lauitiiti as a role model in every sense.

“You can see the example he sets, Ali is a really funny guy you can have fun with but you notice how humble and clean he is,” Gavet says.

“Even without him being on the field through the pre-season we have still looked up to him in many ways. He is our older brother.

“It was a surreal experience when I first came out of the Warriors’ U-20 squad and they partnered me up with Steve Price. I kind of got used to it at the Tigers training with guys like Lote Tuqiri and Benji Marshall, but I think Ali has been a bit different, I have gone back to the start and been in awe again.

“It would be a cool box to tick off to play next to Ali.”

Having signed a second-tier contract with the club Lauitiiti will train full time with the NRL squad this year, but with the expectation of playing predominantly in the NSW Cup side.

He knows the decision to bring him back to Penrose isn’t just a playing one, and that much of his role will be to provide leadership to a team who collapsed at the back end of last season partly due to a lack of it.

“If I can I help the young boys out then good, pretty much I will be sharing my experience and life lessons to see if I can help them out in a way,” he says.

“Just in terms of doing the small things, I struggled a lot when I was younger with little stuff like eating the right things. But that’s massive, especially for us Pacific Island players, and just things like punctuation, turning up on time.

“Those are the small things that go a long way, as well as respect and manners.”