How season 2016 will go for…the Warriors

You would have to be an idiot to try and predict how a season will go for a team before a ball is even kicked. Luckily we have those in abundance here at kiwileaguecentral.com. Here is our bold, and probably completely wrong, guess at how season 2016 will go for the Warriors.

Things didn’t get off to the flying start which many had demanded given their off-season recruitment, as Roger Tuivasa-Sheck, Shaun Johnson and Issac Luke took time to gel with each other and the rest of the team. 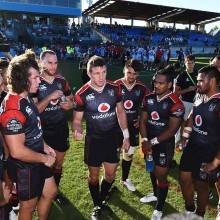 Our prediction: Superstar signings help lead the Warriors back to the finals. Credit: warriors.kiwi

The New Zealand side played some solid football headlined by attacking ability. Manu Vatuvei celebrated scoring 10 tries in a single season for the 11th year in a row.

A solid run of victories over the middle part of the season had the Warriors up around the top four before qualifying through to the finals in seventh position after a little late-season splutter.