To qualify for this list a player has to be eligible to play for New Zealand and have not represented another tier-one nation. But they can be playing for another second-tier nation currently, hence the inclusion of those currently playing for Tonga, Samoa etc.

If his first two games of 2020 are anything to go by, Luke is a revitalised man at the Dragons after being hot and cold for a couple of seasons at the Warriors. Still a tenacious competitor with plenty to offer, it’s doing it consistently that’s the challenge for the 32-year-old from Hawera.

Played 17 games last year but struggled to nail down a regular starting spot in the Tigers’ pack. Made a good start to 2020 though, starting both games played so far at prop and averaging 134 metres.

His 10 try assists last year were the second most by a centre in the NRL in 2019, with Hiku the provider for many of left-edge partner Ken Maumalo’s tries. Didn’t appear for the Kiwis at all last year though.

Still going strong in the shadows of his 32nd birthday, Proctor was part of the Kiwis’ team which beat Great Britain in the second game of their series last year. Will bring up 250 NRL games should he play nine times in the remainder of 2020.

Had a disrupted year after arriving at the Bulldogs mid-season from Penrith, but went on to play 10 games for Canterbury and established himself as their first-choice fullback. Averaged 131 run metres across the NRL season and played on the wing in New Zealand’s mid-year win over Tonga.

Played 18 games for the Knights last year but failed to replicate the 2018 form which saw him rewarded with a Test debut for the Kiwis. Started both of Newcastle’s games so far in 2020 at lock.

Although he played the most games of his three-season NRL career (23) last year, there’s a fair argument that Papali’i may have actually dropped off a little in a struggling team. But there’s no doubting his talent, and with a planned permanent shift to the middle in 2020 we could see the best out of the 21-year-old this season.

After playing just two games across the first two seasons of his NRL career, the big man from Glenora became a permanent fixture in Cronulla’s pack in 2019 and appeared in 21 matches. By the end of the year he was part of the Kiwis squad who played against Australia.

What about the skill from Braden Hamlin-Uele

After topping the NRL in tries scored with 23 in 2018, ‘Fusitua’ was starved of quality ball last year as the Warriors instead favoured the left side of Ken Maumalo. There’s no doubting his class and there’s hope a switch to centre in 2020 will see the Tongan internal return to his best.

Really hit his straps in his second season at first-grade level, earning 12 stars for the Eels and playing 25 games all up. A hard-running edge forward, the one-time Junior Kiwi is on track to become a key part of Parra’s pack. 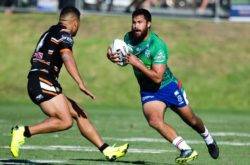